PHOTOVOLTAIC NOISE BARRIER HAS PROVEN ITS WORTH

KOHLHAUER® NOISE BARRIER VOLTA TO SERVE AS MODEL THROUGHOUT BAVARIA
The photovoltaic project at the Montessori school in Neuötting has already won several awards. Now another award has been added: The noise barrier is to serve as a model for other projects in Bavaria.

Dr. Martin Huber (CSU), member of the state parliament for the Altötting district, announced yesterday that he wants to step up his support for ecological noise protection with integrated photovoltaic systems. For this purpose, he wants to launch a special program.

Dr. Hans Reichhart (CSU), the State Minister for Housing, Construction and Transport, he has asked for support for this, according to a press release. Huber had already co-initiated the topic of hydrogen trains at the end of last year and helped to make southeast Bavaria a model region for hydrogen-powered trains from 2024. With his latest push, he wants to generate some of the energy needed for this propulsion technology. “In order to produce truly green hydrogen, establishing ecological noise control alternatives would be a good way to go,” he says.
Another advantage, he says, is that unlike large-scale solar farms, this uses very little land, absorbs sound and generates electricity at the same time. Huber sees potential applications above all in the transportation sector, especially along highways. Here, he says, there are many areas that have so far gone unused.

The noise barrier in Neuötting, which went into operation in 2016, could serve as a model for the special program, he further informs. The operator of the walls, the Inn- Salzach Energy Cooperative (EGIS), had also considered how to protect the newly built Montessori School Photovoltaics as a sound barrier and the new construction area next door from the noise of the old B 12. EGIS came up with sound barriers with photovoltaic modules.

After a long research, they came across the manufacturer “R. KOHLHAUER GmbH” from Gaggenau near Karlsruhe, who was developing such walls, and commissioned the noise barrier. It is 234 meters long and five meters high. The cost was 75,000 euros, including an inverter that transports the electricity to the Montessori school. The rest is fed into the grid. The system generates an average of 51,500 kilowatt hours per year – a result that satisfies those responsible and with which EGIS has attracted nationwide attention. 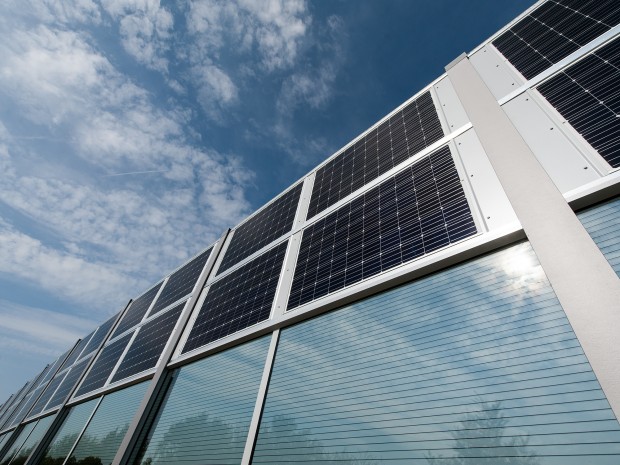 Do you have a challenge ?